Our cluster combines various hardware resources from multiple universities and other organizations. By default you can only use the production nodes (see the resources page of the portal).

Here's the full list of taints on the nodes. Some are set automatically on deployed jobs, some can only be used by privileged users. Please refer to this list and don't set the ones you're not allowed to use. 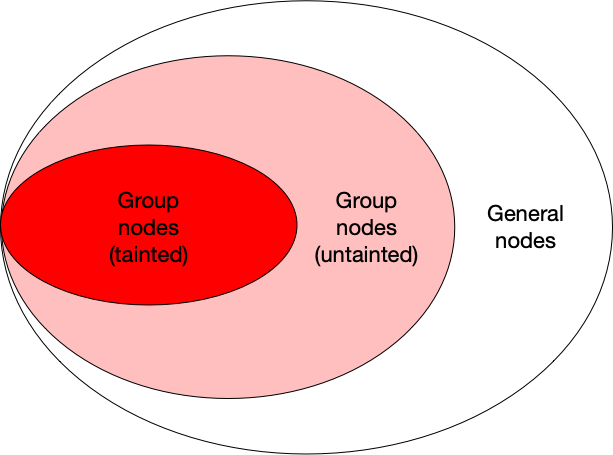 For such group's namespaces the pods will be automatically changed to have the corresponding toleration to be scheduled on such nodes. If user is targeting ONLY THE GROUP NODES by using the nodeAffinity such as:

the pods will also automatically get the higher non-preemtible owner-no-preempt (+10) priority. This means such pods will have priority for scheduling on ALL group nodes (tainted and untainted on the image above). General users have lower priority on untainted nodes and not able to run on tainted nodes.

Non-preemtible priority means that the lower priority pods will not be killed right away when the higher-priority pod appears, but higher priority will be considered when choosing candidate pods for a free resource.

Some nodes in the cluster don't have access to public Internet, and can only access educational network. They still can pull images from Docker Hub using a proxy.

If your workload is not using the public Internet resources, you might tolerate the nautilus.io/science-dmz and get access to additional nodes.